This article is an edited cross-post and can also be seen on the Wellcome Sanger Institute’s website.

In this blog, Mutographs patient advocates Maggie and Mimi share their involvement in the research, their own experiences of cancer, and their journey around the globe. As told to Louise Walker, Public Engagement and Involvement Coordinator for Mutographs and edited by Alison Cranage, Wellcome Sanger Institute.

Signatures, fingerprints, ‘tell-tale signs’ are all terms that have been used to describe patterns of changes, or mutations, in a cell’s DNA that can lead to cancer. It was in 2013 that Sanger Institute scientists coined the term ‘mutational signatures’ to describe these patterns of mutations, each with a specific cause. Ultraviolet (UV) light leaves distinctive changes in a cell’s DNA, while tobacco smoke leaves a different arrangement of mutations. These complex patterns, made visible through genomic sequencing the 6 billion letters of a cell’s DNA, serve as a fossil record. They can give scientists clues to what has happened in a cell’s history, and what caused it to become cancerous.

Researchers have discovered around 50 different mutational signatures to date, but the cause for only half of them. The Mutographs team aims to uncover more. The potential impact is huge – if we can find causes of cancer, previously hidden, we may be able to avoid them.

Maggie Blanks and Mimi McCord were asked to be involved in the project by the scientific team during the preparation of the funding application. They now sit on the steering group and take part in meetings and conferences about the work, bringing the patient perspective to this complex project. They have visited partner sites and organisations in Kenya and the Czech Republic and more recently Iran, though this one had to happen virtually. They describe their role as bringing a ‘human level’ to the research.

“Cancer research starts with the patient and ends with the patient. All this has been done for the patient’s benefit. The human element in this is very real and very vital. And I think that’s what Maggie and I are able to bring.” – Mimi

We spoke to them about their experiences and involvement in the project so far.

Maggie (left) and Mimi (right) during their trip to visit patients and healthcare professionals in Eldoret, Kenya

Two types of oesophageal cancer are being studied by the Mutographs team – oesophageal adenocarcinoma and oesophageal squamous cell carcinoma (OSCC). These cancers are of interest partly because of their unusual global distribution.

In the UK, about 9,200 people a year are diagnosed with oesophageal cancer, with Oesophageal adenocarcinoma being the most common type (source) .

Mimi shared her own experiences of the disease.

“My late husband was diagnosed with oesophageal adenocarcinoma following difficulty in swallowing. He was 47 and had no previous health issues at all. He had persistent heartburn, which he was self-medicating with Rennies. I would cheerfully buy them, completely unknowing that these were masking a symptom. Anyway, difficulty in swallowing sent him to his doctor. An endoscopy showed that not only was it oesophageal adenocarcinoma, but it was advanced and he had metastatic disease pretty much throughout his body, and he died nine weeks later.

“I knew nothing about oesophageal cancer. I knew the gullet, food pipe, etc, but nothing else. But his death was completely preventable. So as a result of that I founded what was the McCord Oesophageal Cancer Fund and is now Heartburn Cancer UK. I remain a very passionate advocate in raising awareness of the link between heartburn, Barrett’s oesophagus [where cells of the oesophagus change shape], and oesophageal adenocarcinoma.”

Rates of oesophageal cancer vary hugely across the globe. Some countries, including Iran and Kenya, have a high incidence of the squamous cell version of disease with 20 to 30 people per 100,000 affected. In other countries, like the UK, Japan and Brazil, the rate is less than 6 per 100,000. Within countries there are ‘hot zones’ where it is more common in some regions than others. These differences can’t be explained by known lifestyle or environmental factors. 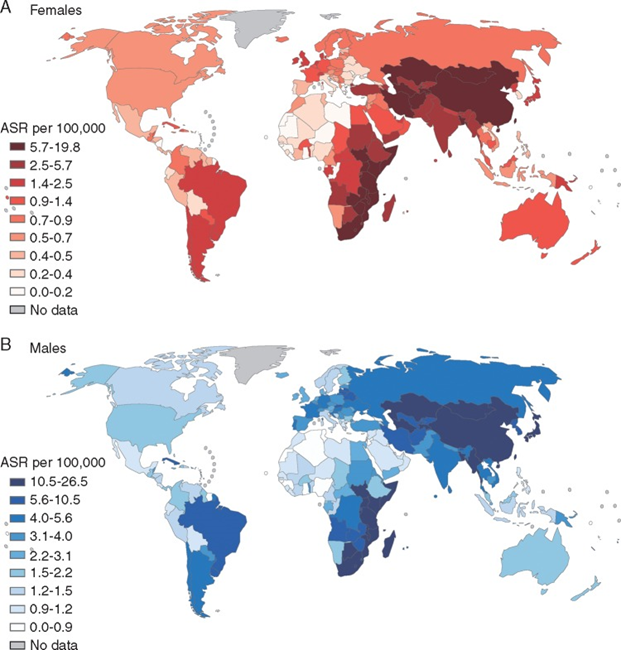 The Mutographs team have studied the genome sequences and accompanying health and lifestyle data from 500 people with oesophageal squamous cell carcinoma (OSCC). Donors are from eight countries with varying disease rates. The results of this study were published in October 2021 in the scientific journal Nature Genetics.

The Mutographs team includes expertise in epidemiology and mutational signature analysis to work out what might be responsible for the cancer in any given location. OSCC has never been studied at this scale before, comparing genomic and lifestyle datasets from across continents.

Maggie and Mimi bring patient expertise to the team. Maggie, who set up the Pancreatic Cancer Research Fund after her husband Alan died from pancreatic cancer, summarised ways that patient advocates can contribute to research projects:

“On a broad level, we explore ways the patient experience or viewpoint can be incorporated into the research, and explore and support ways patients can be involved actively in the research design process. We consider and recommend ways that information and outcomes can be shared with patients and the public. In more detail, perhaps that would mean things like exploring the room for patient involvement in the methodology that’s used in the project. So for example, questionnaire design, or other materials design, making these patient-centred and relevant.”

Cancer across the globe

Another element to their role has been to visit partner sites in Kenya, the Czech Republic and Iran to find out more about the context of cancer treatment and healthcare in those areas, and to identify ways to effectively convey any findings that come from the Mutographs study.

Maggie, Mimi and members of the Mutographs team and study collaborators in Eldoret, Kenya

As well as varying cancer incidence rates, attitudes and treatments for cancer are very different in different parts of the world. Maggie and Mimi discussed their visits to Kenya and the Czech Republic – both trips were in person, before the pandemic.

Mimi said: “Travelling, particularly to Kenya, for me, has been the most interesting part. Seeing a completely different culture, a completely different way of dealing with cancer. There is a huge stigma attached to cancer there. Seeing the facilities made me realise here we have a privileged life in many ways.”

“And then, in contrast, the Czech Republic visit and seeing how they deal with cancer, which was more similar to here in the UK. What was different there was the incorporation of patient advocates within the government health system, which we don’t have, and I think it’s something that would be a useful tool for us.”

“Being able to see how the different countries deal with cancer, the politics behind it, the politics within it, and how it is dealt with as a whole is important for me.”

For Maggie, seeing cancer in different cultures led her to think about the role that patients can play in research that spans the globe.

“When we’re thinking about patient and public involvement [PPI] in a place, country or region, we need to consider how cancer is viewed in that scenario.  In the region of Kenya that we visited, cancer was associated with stigma and with secrecy. So the question for me was – how does PPI apply here? How do you go about involving patients, and how do you disseminate the results of research in that sort of scenario.”

Maggie and Mimi visited Iran, virtually, in 2020. Iran is of particular interest to the Mutographs team because while OSCC rates are low in the capital of Tehran, they are high in other areas of the country – particularly the Golestan Provence in the North East. 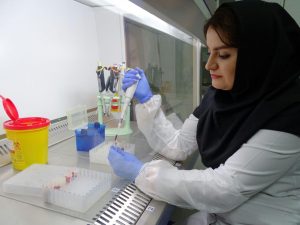 A researcher working on samples at the Digestive Diseases Research Institute of Tehran, Iran.

They met researchers in Golestan who have been working to try and understand why OSCC rates are so high. Over 50,000 people have taken part in studies over recent years, and Maggie and Mimi asked how the researchers had engaged with communities so well. The team highlighted working with trusted local community leaders and healthcare workers as a key factor in their success. Participants were also able to benefit from free diagnostic procedures, plus the study itself created jobs.

“It was really good to hear how passionate the study team was about helping communities that have been so badly affected by OSCC. The team in Iran has really shown the benefits of engaging patients early on in the research process,” said Mimi.

The risk factors for OSCC are still only partially understood. There is some evidence that drinking alcohol, smoking, drinking scalding hot liquids – like tea – and opium consumption may have a role to play.

Despite the profound global differences in rates of OSCC, the teams’ analysis of mutational signatures did not identify a known or new mutational process that could be responsible for the disparities3. Their results were published in October 2021 in the scientific journal Nature Genetics.

Instead, their results show that the overall mutational profile of OSCC is extremely consistent around the world. They also highlighted that mutations in the APOBEC protein in cells are likely to be involved.

The Mutographs team are continuing their work into a  range of cancers including bowel, pancreatic and kidney. Like the two forms of oesophageal cancer, each of these has a varied global distribution – and the team hope to use the power of mutational signatures to uncover why. The search for hidden causes of cancer continues.

Maggie and Mimi will continue to support the team and keep bringing the ‘human level’ to the project. More virtual trips are planned for the future and they are also working with the Mutographs team and their collaborators to find ways to further embed patient involvement in studies like this.

Dr Sarah Moody is a postdoctoral researcher at the Wellcome Sanger Institute working in the Mutographs team. She reflected on Maggie and Mimi’s role and PPI in the project.

“Having Maggie and Mimi on the Mutographs team really helps to remind us of the people behind the samples. It’s easy to forget that the data on our computer screens is from people who have not only donated their tissue but also spent the extra time and effort to provide the additional information on their lifestyles which is essential to our project. Keeping that connection to the patients and helping to understand cancer and cancer research from their point of view, wherever they are in the world, is important and helps to remind us why we do this work.”